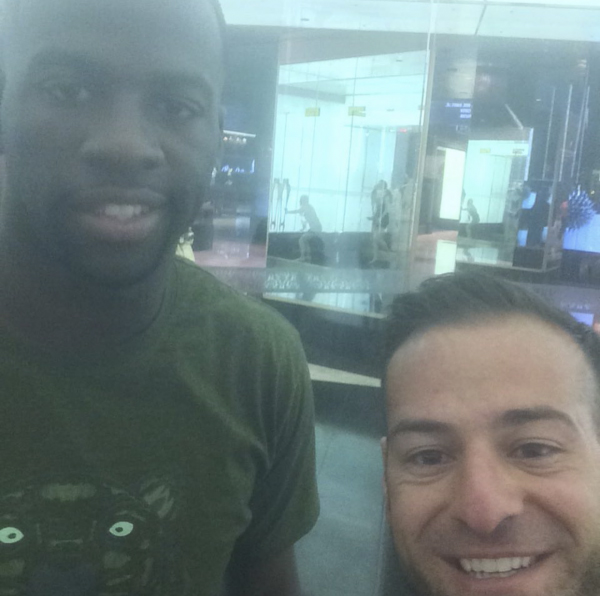 If I said “Draymond Green is the stud athlete he is because he has a chip on his shoulder” would you argue the point?

I have a chip on my shoulder.  Why you ask?  Well for several reasons.  Do you think it’s bad to have a “chip on your shoulder”? I believe that people will purposely have a “chip on their shoulder” as some use it as a form of motivation.  I know I do.  What do you think?

The main reason I have a chip on my shoulder, is that I feel that in the Hustle and Grind of Silicon Valley respect is miles more difficult to earn for entrepreneurs that are not in the tech field.  Here’s a quick story for context (whether you live in Silicon Valley or not you may be able to relate)…

Recently, I have experienced “success.”  Well, it depends on what “success” means to you.  I’ve heard a lot of “Congratulations” lately as my network has seen the work Sergio and I have done with WhatUp Silicon Valley is paying off.  The payoff being that we are now officially partnered with the Silicon Valley Business Journal.  In addition to that, the SVBJ did a cover story on podcasting and we had the feature image.  So appreciative of these opportunities and kind words from my friends.  However, I do not feel as tho we are “successful” with WhatUpSV (yet).

I was on the Board of two Chambers of Commerce at the age of 24 years old.

During this time I also became Chair of the Silicon Valley Young Professionals.  In 2013 and 2015 I respectively graduated from Leadership Morgan Hill and Leadership Santa Clara.

For the past 3 years I have just about doubled my sales year after year.  In 2015, I wrote a letter to a major news publication in our area that fell on deaf ears.  I wanted to increase exposure for ValueBP’s 35th anniversary as that was my Dad’s wish and I FAILED.

I wrote a letter about how a family business has withstood the test of time by battling the big box stores.  In1980 my dad opened ValueBP by going door to door selling and repairing typewriters.   If you’ve followed my story you know the history about how we became a brick and mortar office supply store, moved to online ordering only and now I run our promotional products department which is our new focus and we’re growing at a rapid pace.

There used to be over 30 independently owned and operated office supply stores in Silicon Valley – as of today there is only 1 and that 1 is Value Business Products.  We have evolved over the years and even tho we are not a tech company we have found a way to “Survive in Silicon Valley as Non-Techies”.

WhatUp Silicon Valley was launched in 2017 and it’s a badass brand with a chip on it’s shoulder.  I will continue to grind and live the Silicon Valley Hustle and support mom and pop businesses along the way.

Your support means the world to us.  Thank you for reading this blog post and would love to hear your thoughts.

I realize I didn’t really talk about Dray, but he is my favorite player ever in the NBA and I admire his leadership and drive.  Here’s a pic of when I met Draymond in the casino lobby of the Cosmo in Vegas.  I was hungover as shit while out there celebrating one of my best friend’s bachelor parties. Dray gets it.  I saw him and asked for a quick pic for a longtime fan. Even tho his friends were calling him and told him that they didn’t have time, this dude still took the time to take a pic with a random stranger in the lobby doors of a casino hotel in Vegas.

Cheers to chasing your dreams and not forgetting where you come from.